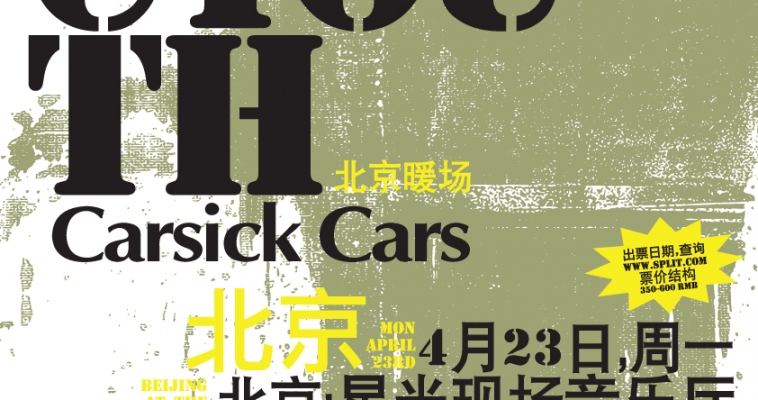 After several false alarms and much speculation, we are delighted to announce that Sonic Youth are indeed coming to China.  You can see this legendary New York band in April.  It’s going to be the most exciting show these shores have ever seen.

We’ve already seen major International artists playing China in 2007, and more will come, but ask yourselves – are any as important as Sonic Youth?  Cui Jian seems not to think so:

“It came all of a sudden, Sonic Youth is coming to China! The band I once felt so far away from me now has come to my doorstep where the red flag is still fluttering. It doesn’t matter what people identify Sonic Youth with – the post-punk or the guru of No Wave or the pioneer of free avant-garde, experimental and noise –  what does matter is they are here, here in Beijing and Shanghai. They’ll land on the mainland!”

Sonic Youth have re-written the rules and in doing so have become the most culturally important independent rock band of the last 25 years. They have been a major influence on Chinese youth and the rock scene here since the very beginning, and their appeal spans ages and genres in today’s China. Moreover the band is still relevant today, making music that is the soundtrack to many lives.  Sonic Youth are still experimenting after 21 albums and their 21st – Rather Ripped (2006) – was ranked number 3 album of the year by Rolling Stone!!!

Sonic Youth’s Kim Gordon explained their decision to come in 2007 to play live for the first time, “we’ve been interested in China for many years, but the timing has never seemed appropriate for a band like us.  All of a sudden China seems to be opening up and accepting the outside world.  We cannot wait to be one of the first major Western bands to play this amazing country.”

Gordon, along with her husband Thurston Moore and Lee Ranaldo, formed Sonic Youth with drummer Richard Edson in 1981. They went on to inspire and influence a whole generation of other artists. From the outset they mixed experimental rock with New York’s avant-garde aesthetic and created an entirely new sound, a sound that completely redefined what guitars could do.

Nathaniel Davis, of Split Works, is excited at the band’s decision to recognize what Spli-t wants to bring to the Chinese audiences, “We want to create great live music experiences that will leave a lasting impression on local music fans. With Sonic Youth, the audience will see a band that has remained at the top of their field for over 25 years. This is live music uncompromised.”

This will be a seminal moment in the development of China’s emerging music scene. Spli-t Works is proud to have the opportunity to work with such an influential band…

Come and be blown away.