and became a global phenomenon.  – The Guardian 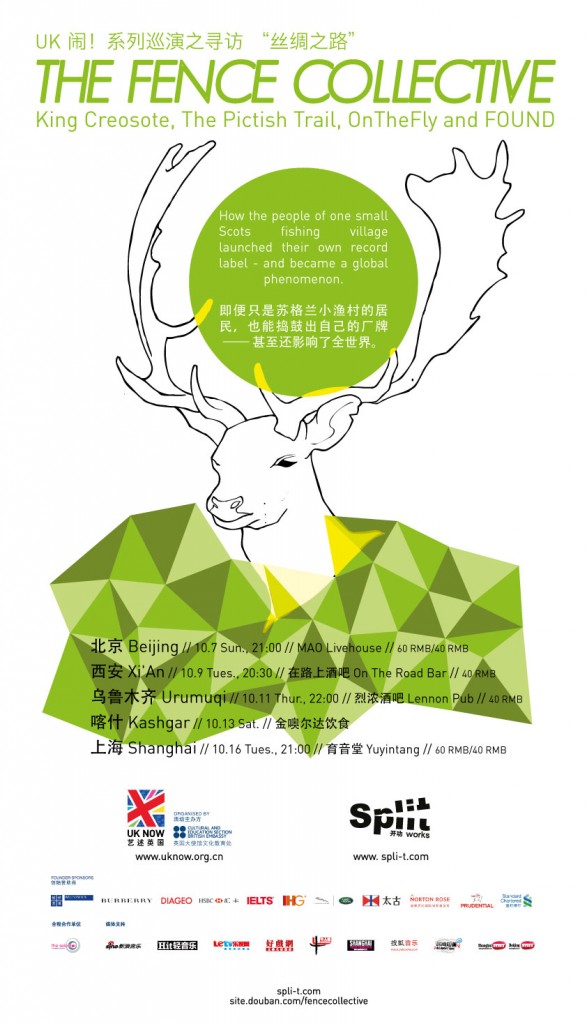 The men with beards are coming. Fence, a self-described collective of “musicians, artists, craftsfolk, chancers, and slackers” based out of Fife, Scotland, make their way to China for the very first time in October 2012. This loosely-knit group, comprised on this tour of label laoban/singer-songwriter King Creosote, schizo-popsters FOUND, lo-fi balladeer The Pictish Trail (aka Johnny Lynch) and drummer/producer/sole beardless representative OnTheFly. The Collective comes to China under the auspices of leading promoters Split Works, working together with the British Council and UK Now, as part of Split Works’ UK Now Concert Series.

Fence Records and The Fence Collective subscribe to a fierce DIY, lo-fi, analog ethos, with most members living and recording out of remote locations in the east of Scotland. The label’s output is reserved exclusively for members the Collective – a loose-knit amalgam of singer-songwriters, musicians, bands and electronic artists, who collaborate with one another on record, as well as on stage. Although their music isn’t strictly ‘folk’ in the traditional sense, the Collective’s tendency to hand-down and share songs with one another is very much in the folk spirit.

This time in China, The Fence Collective will be touring along the ancient Silk Road trade route, stopping in the northern route’s origin city of Xi’an before proceeding along the historical footsteps of Marco Polo to Urumqi and Kashgar. Along the way, they will commune with local musicians playing traditional instruments in modern formations and arrangements. A laid-back touring ethos will result in always creative, sometime hilarious combinations along the way that simply cannot be missed.