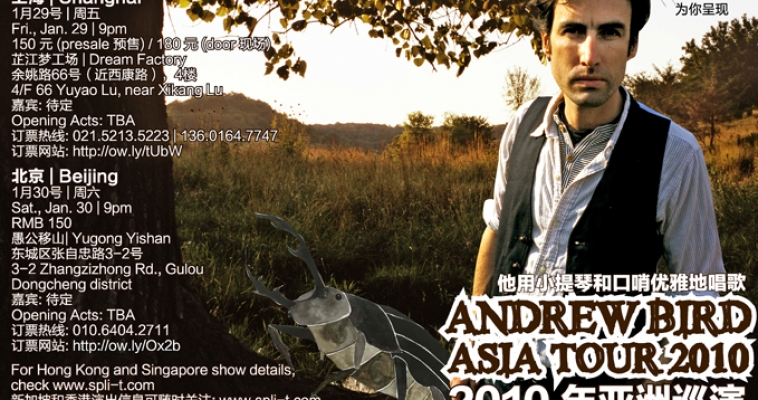 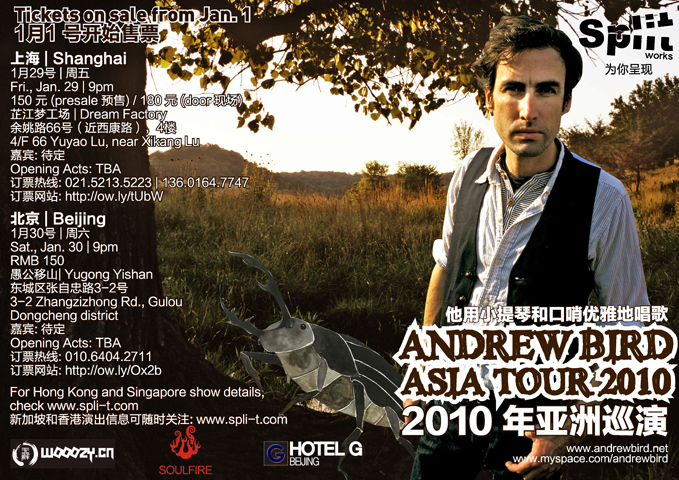 Chicago, 1977: A four-year-old Andrew Bird picks up his first violin. (Actually, it is a Cracker Jack box with a ruler taped to it.) So begins a formative period soaking up classical repertoire completely by ear followed by a teenage expansion into Hungarian Gypsy music, early jazz, country blues, South Indian music and more, as well as the discovery of an uncanny whistling ability.

Fast-forward 32 years – the Bird man has 8 critically lauded albums under his belt (5 solo works and 3 with his band, Andrew Bird’s Bowl of Fire), and has been winning accolades for his astonishing live performances. The New York Times’ Jonathan Mahler witnessed the multi-instrumentalist virtuoso performing in his native Chicago last January, and summed up the experience thusly:

“Onstage, Bird was engaged in something of a musical high-wire act, whistling, singing and manically shifting from violin to guitar to glockenspiel. All the while, his feet were busy working the pedals of an electronic looping station that recorded and then played back his musical progressions in short intervals….Bird’s sound is not easy to categorize. His songs are swelling and orchestral, the legacy of years spent studying classical violin at Northwestern University’s prestigious conservatory and elsewhere…His songs have a pastoral, homespun feel, but they also have a darkness and emotional complexity not typically associated with folk rock.”

True dat, Jonathan Mahler! Bird began his musical career with a 1996 solo violin album, Music of Hair, that paid tribute to American and European folk traditions, as well as jazz and blues. A year later he released Thrills with his new band Andrew Bird’s Bowl of Fire, followed by Oh! The Grandeur in 1999, The Swimming Hour in 2001 and Fingerlings in 2002.

In 2003 Bird re-invented himself as a solo artist, recreating the sound of a full band with the help of multitrack recorders and loop pedals. Solo albums Weather Systems (2003), The Mysterious Production of Eggs (2005), Armchair Apocrypha (2007) and Bird’s latest, Noble Beast (2009) have since blown critics and fans away with their disarmingly off-beat lyrics and lush, layered instrumentation.

We at Split Works are psyched to be hosting this baroque-rock gypsy-folk indie-orchestral juggernaut on his first tour in these parts. Come one, come all, and prepare to be blown away.