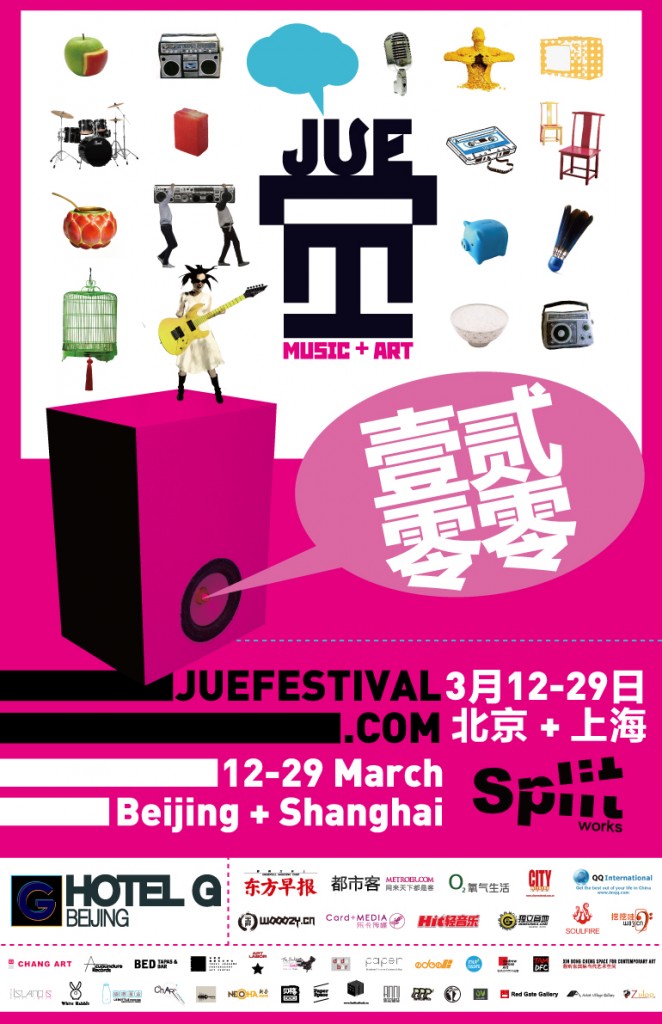 From March 12th-29th, JUE | Music + Art is back with a vengeance. Brought to you by Split Works, this fiercely independent  annual festival of mixed-media goodness will be going down at venues across Beijing and Shanghai during 17 days of spring, showcasing up-and-coming local and international artists of all stripes. Jue 2009 featured 25 events, 91 participating artists, and over 12,000 attendees. We’re going twice as big in 2010, with over 50 events, and participation from lots of wonderful artists, venues, movers and shakers in both cities.

Our goal is to bring community together in appreciation the best of the blossoming arts scenes in these two cities , and to stimulates local creative communities to present their work and have it promoted to a wider audience.

And the Sonicbids winner is:

We teamed up with Planetary Group and US-based artist-promoter matchmaking service Sonicbids to arrange an all-expenses paid, 6-city China tour for one artist. There were no barriers to entry – anyone from anywhere in the world could apply.

We sifted through an extraordinary 773 applications, and in the end we chose Icelandic experimental composer and neo-classical multi-instrumentalist, Olafur Arnalds. Our mandate was simple – to choose a band/ artist that is well-positioned musically to use the Sonicbids tour as an entry into the China-market, an artist that really had a “fit” with China and that, at the same time, would bring something new to the audiences of this country. Olafur meets all these criteria in spades, not to mention that his music is gorgeous.

We’ll be announcing details of Olafur’s 6 China gigs after the Spring Festival, including anchor performances in Beijing and Shanghai as part of JUE.