Palmistry, signed to Mixpak, and Endgame, to Hyperdub, are two emergent artists on everyone’s watch-list. Expect Palmistry’s serene, skeletal dance-pop to lull you into a hushed, slow-dancing trance, before Endgame brings his A-game to jolt you back to the dancefloor.

Friday, 14 October in Shanghai (The Shelter) and Saturday, 15 October in Beijing (Dada). On support duty in Shanghai:  Hyph11e and 16666 from the Genome6.66Mbp sonic crew, and Wooozy regular Sleepless. In Beijing: Do Hits’ resident pan-Asian music dabbler Guzz, trapmeister Bloodz Boi, and Puzzy Stack.

Palmistry is the brainchild of London-based musician Benjy Keating. Vocalist and producer, Palmistry makes hybrid skeletal pop music that is stripped to the bare essentials while incorporating innovative electronica that is both distinctly new and, like all the best songwriting, instantly familiar.

Palmistry wrote and recorded his debut album Pagan (2016) under the Mixpak label. A succinct showcase of Palmistry’s “deconstructive” approach to contemporary pop and RnB – his work discards the misogyny and sexist undertones of most modern pop in pursuit of something more elemental. The beat takes a backseat as melancholy and euphoria share equal space, with often just a single synth-line or buttery back-beat showing the way through the maze. He’s make a triumphant return to China after a standout Wooozy Offline set in 2015.

Beyond his music, Palmistry gives us a multi-layered experience into his world – working alongside talented collaborators to build his own visual universe through artwork, photography and film.

“Endgame’s beats have an inherent, essential quality to them.” – Tiny Mixtapes

Endgame, a prominent producer and London-based DJ, is no stranger to the Palmistry school of deep synths, dancehall and auto-tune serenades. But his music pursues a more muscular goal – rooted in both hip-hop and grime, incorporating drilling melodies with a militant sound palette, percussion leading the charge into dancefloor-filling anthems. His impressive club tracks never miss a beat, or skip a step.

2015 saw him release debut self-titled EP (on Portuguese label Golden Mist) as a fierce statement of intent. Aptly-named follow up Savage (on New York’s Purple Tape Pedigree) is widely regarded as a high water mark for “emergent” club music, dubbed “Track of the month” on Mixmag, and making the Tiny Mixtapes end-of-year list. Now signed to the influential Hyperdub Records, Endgame is hard at work on a forthcoming release called Flesh.

Playing in-the-flesh, October 2016. Friday the 14th in Shanghai alongside Hyph11e, 16666 and Sleepless. Saturday the 15th in Beijing with Guzz, Bloodz Boi and Puzzy Stack. 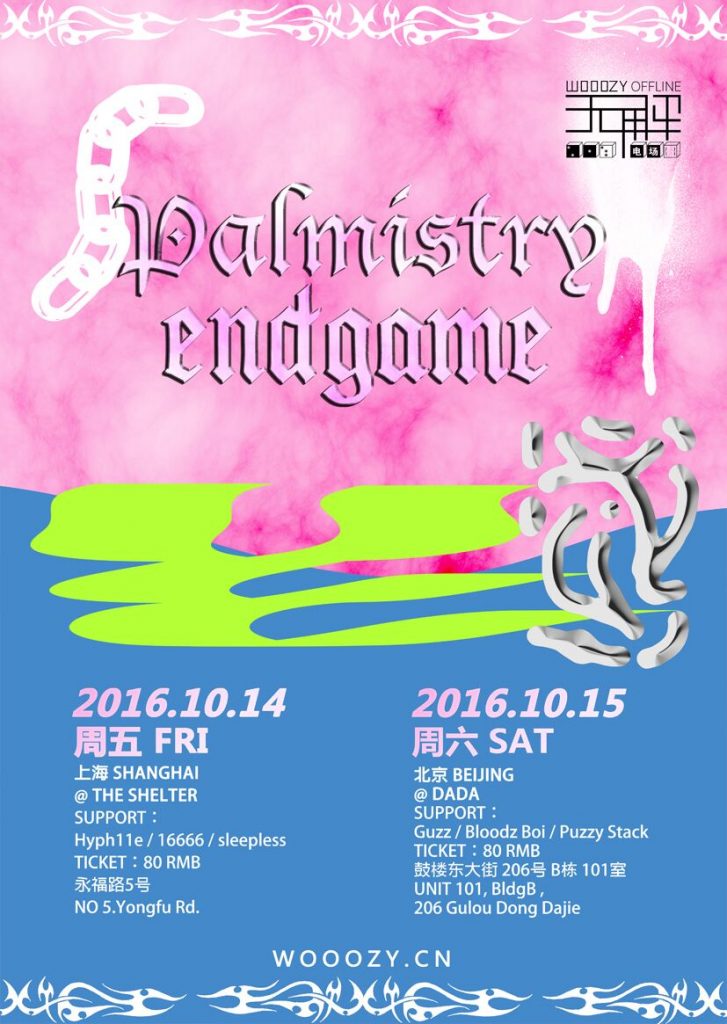