“Vile has charm, character and imagination enough to elevate his fully reclined, dusty-haze style to something really special. – The Guardian

“Compelling as Vile’s words can be, much of the magic lies in his delivery.” – Pitchfork

His soaring solo career, buoyed by the critical acclaim that greeted 2015’s b’lieve i’m goin’ down…, has bought him a newfound mainstream visibility, one he wears with nonchalant ease. Vile’s evocative, dreamy, finger-picked acoustic tunes are freighted with compelling word-play, and a floating forcelessness that folds itself around you. Their melodies nestling snugly in your mind. His songs – candid, and brilliant and focused – are almost like folk hymns. Seemingly timeless, yet always of the moment. Sonic Youth’s Kim Gordon is a big fan. “He’s a man with an old soul.”

On stage, alongside his band the Violators, the laid-back, wavy-haired Vile is tender and evocative, elusive but companionable. “Tough in the gut but giddy in the head.”

Float away Friday, October 14 in Shanghai and Sunday, October 16 in Beijing. On support duty in both cities, the cozy, whispery, nostalgia-drenched blues rock of Uncle Hu, recently signed to the influential D-Force Records.

Two more well-received albums followed in 2009 – God Is Saying This to You…and Childish Prodigy, and Vile’s music slowly began to take the woozy, beguiling form it holds today – with the support of his backing band The Violators. By this point, Vile was a true cult artist – recommended by indie record shops and tastemakers the world over. 2011’s Smoke Ring for My Halo even sneaked in to the Billboard Top 200.

By the time Kurt’s fifth studio album, the radiant Walkin on a Pretty Daze, was released in 2013, he was an indie institution unto himself. “Best New Music” on Pitchfork. Loving coverage in NME and Drowned in Sound. Daze.. made a number of ‘Best of the Year’ lists, and was described as his “most spacious, becalmed record yet’.

2015’s b’lieve I’m going down, on the seminal Matador Records, was Kurt’s breakout moment – if he ever needed one. Sonic Youth frontwoman and countercultural hero Kim Gordon called him one of “indie rock’s most gifted guitarists.” The album won more accolades than this press release can accommodate, including a chart-topping single (“Pretty Pimpin”)

We’re beyond excited that Kurt Vile is finally making his China debut. Friday, October 14 in Shanghai and Sunday, October 16 in Beijing. It’s going to be moody, drifting, echoic, profound. 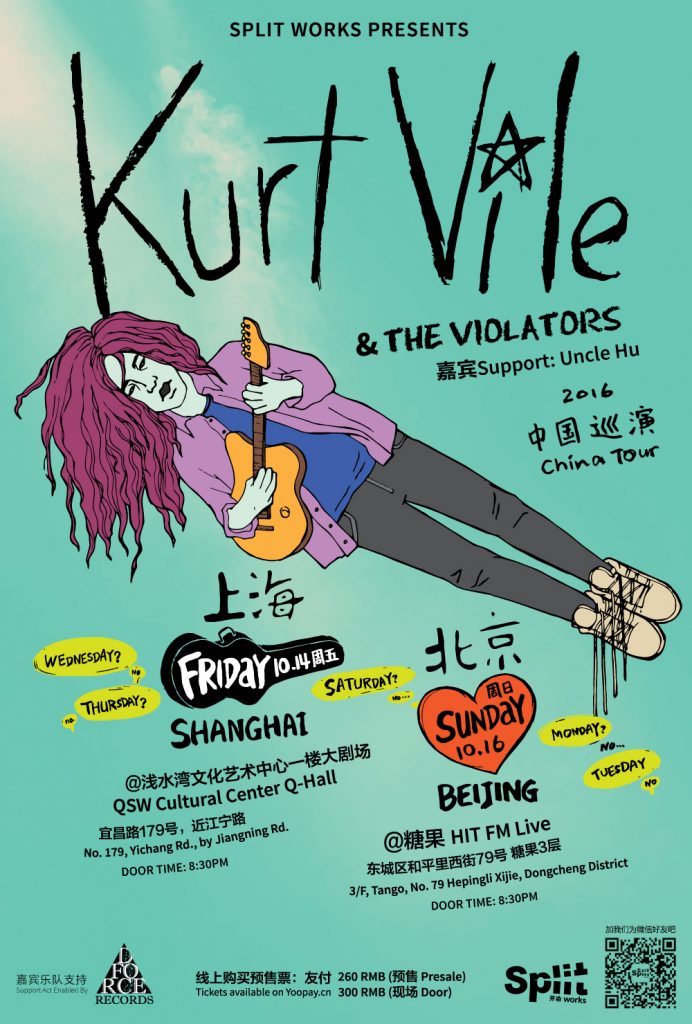