Kamixlo is “London’s best DJ right now, no question” (Dazed Digital), a leading member of London’s influential ‘Bala Club’, the collective throwing some of the city’s most sought-after parties.

He’ll be bringing his anarchic dance jams to Shanghai (The Shelter, June 8) and Beijing (Modernsky Lab, June 9) for two riotous reggaeton parties. It’s music to wrestle your demons to.

On support duty, we’ve got the smooth, versatile grooves of Howell, Ginga, Kilo Vee and Sleepless in Shanghai, and the trap/hip-hop stylings of Bloodz Boi, Pussy Stack and Dokedo in Beijing.

The Brixton-based producer with Chilean roots is known for his brutal DJ sets, combining a gleeful disregard for genre with noise-punk blasts and punishing bass. His Bala Club parties, conceived as an inclusive and diverse alternative to “claustrophobic”, overly macho mainstream club nights, are at the forefront of London’s underground club scene. Thrilling, Latin American-inspired stomps built on notions of freedom, expressiveness and curiosity.

They’ve rightfully earned him a cult following, one that has caught the attention of tastemakers PAN and Visionist’s newly launched imprint Codes, on which he launched his debut EP Demonico on October 2015. Demonico contains Paleta, the “tune of the year” for 2015 (MixMag). ‘Paleta’ explodes every rule in club music – shattering them into a million pieces, dropkicking them to submission and blasting them collectively till they reassemble as an unstoppable nugget of a club track.

Kamixlo’s DJ sets are 90-minutes of that intensity. In November 2015, he was named among Vice’s ‘Musical Class of 2016’ – one of 9 artists expected to define the sound of the coming year. 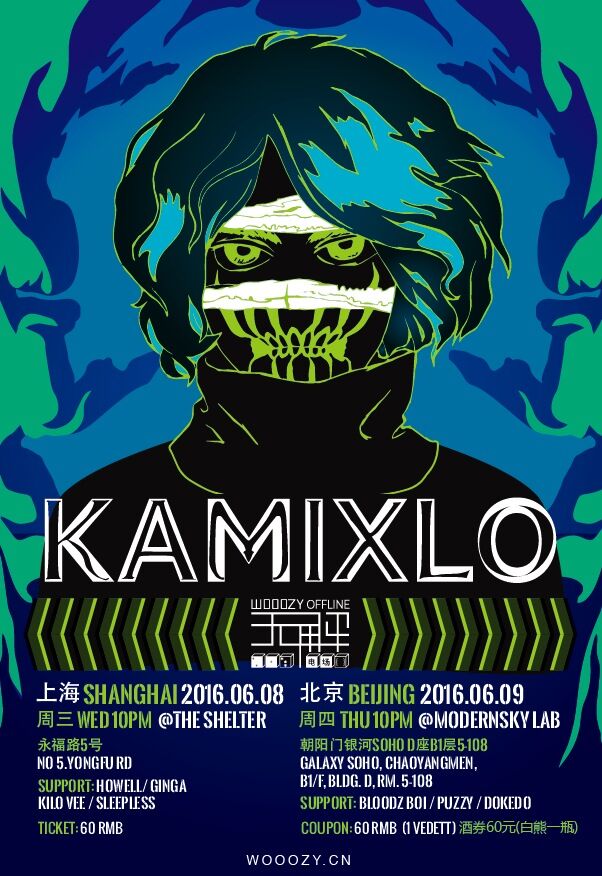