“Beautiful, thrilling and exhausting. The Godspeed ethos of wordlessly eliciting universal truths remains as devastatingly effective as ever.” – The Guardian

“Sheer beauty…when [Godspeed] play, the rest of the world goes away.” – Pitchfork

One of the finest live spectacles in modern music.

In March 2016, Split Works presents the long-awaited second coming of the legendary post-rock titans. Their appearances are “a triumph of sound and vision,” (Louder Than War) filled with “music that can make you glad to be alive” (Stereogum).

Just ask the folks who were there the first time around, back in 2013.

Godspeed You! Black Emperor began with Efrim, Mauro and Moya in the early 90s, playing a handful of shows and recording a self-released cassette as a trio before deciding to transform the group into a large band. Recruiting numerous Montreal musicians through 1995-1996, GY!BE mounted sense-rattling wall-of-sound performances, featuring as many as 14 musicians and several 16mm film projectors, before recording their debut vinyl-only Constellation album in 1997.

They transformed a warehouse space into the Hotel2Tango, a DIY hive of activity with band rehearsal rooms, silkscreen and wood shops, and weekend shows that took place under the radar. The group settled into a permanent nine-member line-up by late 1998, with Aidan and Bruce on drums, Thierry and Mauro on basses, Efrim, Dave and Roger on guitars, and Norsola and Sophie on cello and violin respectively.

The band toured and recorded incessantly from 1998-2002 and gained a reputation for mesmerizing live shows marked by orchestral dynamics, epic rock power and haunting, beautiful film loops. After four records, GYBE announced an indefinite hiatus in 2003; which lasted until December 2010, when the band returned to curate and performs at All Tomorrow’s Parties in the UK, followed by extensive international touring. October 2012 saw the release of Allelujah! Don’t Bend! Ascend!, their first recorded work in a decade, to widespread critical acclaim. After headlining numerous international festivals and playing across the globe, GYBE slowly and steadily began work on a new album through late 2013 and 2014. In 2015, Asunder, Sweet And Other Distress emerged with a mighty slab of superlative sonics, shot through with all the band’s inimitable signposts and touchstones: huge unison riffage, savage noise/drone, oscillating overtones, guitar vs. string counterpoint, inexorable crescendos and scorched-earth transitions. The album topped a number of year-end lists, hailed as an “incredible work [that] finds them again evading the confines of formula” (Spin).

This spring, Godspeed You! Black Emperor return for their second China tour. There’s no band quite like them out there, and you won’t see anything quite like this. Stand by for epiphanies. 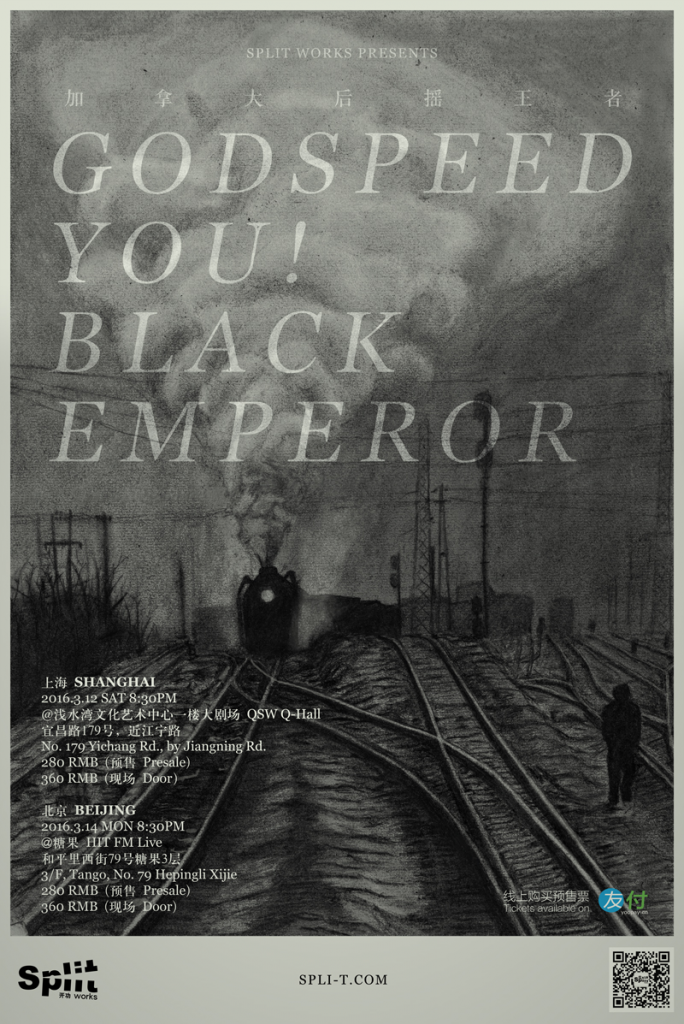