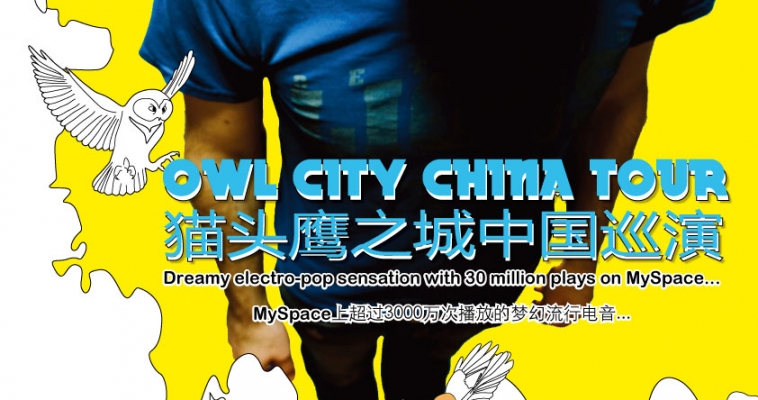 In the US state oflies a small town called Owatonna with roughly 22,000 inhabitants. Within that city is a quiet road with a modest house. In that house there’s a messy basement with no windows. That’s where you’ll find 23-year-old Adam Young aka Owl City hard at work perfecting candy-coated electro-pop, like a hipster Willy Wonka.

From within the “cave” of his parents’ basement, as Adam likes to call it, he has begun to quickly win over a large audience thirsty for something genuine, melodically infectious, and uplifting. The same adjectives could easily describe Owl City’s first official full-length album – Ocean Eyes – which is soon to be released by Universal Records in China after becoming a #2 bestseller on iTunes earlier this year, and was recorded in – you guessed it – his parents’ basement.

Adam’s brand of fizzy, escapist electro-cottoncandy has earned him comparisons to fellow synthesizer-lovers the Postal Service; but the ambiance of Adam’s music – conjuring up hot-air balloon rides, underwater dives, and sun-bleached landscapes – represents the workings of his own imagination, fused with influences ranging from New Wave to disco and synthpop.

Having gained a rabid following on MySpace, Adam released his EP Of June in 2007, followed by the Maybe I’m Dreaming in 2008. Maybe I’m Dreaming hit #16 on the Billboard Album charts, a jaw-dropping debut from an indie singer-songwriter.

Split Works is excited to be bringing the MySpace phenomenon to China for the first time, and to give his fans in China a chance to experience his live set, where he will be joined onstage by a 4-person band and talented local support from The Lovesong (HK), A Hidden Trace (WH), Ben Houge (SH) and Silkfloss (BJ).