Hanggai and Song YuZhe in Shanghai 2010 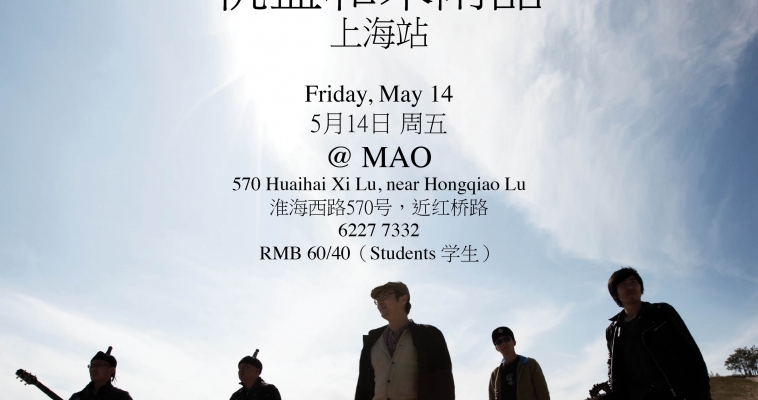 When Beijing-based punk rocker Ilchi heard throat singing for the first time, he was determined to investigate his family’s Inner Mongolian heritage. He journeyed there, met two traditional musicians named Hugejiltu and Bagen, and soon Hanggai was born. Based in Beijing but devoted to traditional Mongolian songs, Hanggai’s spacious, undeniably gorgeous music has won it many fans –and accolades from international press including the Guardian, the Observer, Pitchfork, NPR, Popmatters and many more — as they embarked on their tour across all over the world.

After playing to a packed house at Yuyintang during the JUE Festival, the Mongolian five-piece is stepping it up a few notches, performing at Shanghai’s MAO Live House for the first time.

The venue is bigger, but the music will remain the intimate, powerful throat-singing and rock that has people singing their praises. If you’ve seen them before, you know why you can’t miss this show. If you missed their JUE performance, don’t make the same mistake twice!

Hanggai sing about Mongolian Robin Hoods, mix throat singing with rock instruments, and dress like men of the steppes even though they live in the teeming metropolis of Beijing. But embodying contradictions comes naturally to ethnic minorities in China — only this time it’s different.

With their elegant songs, top-notch production and strangely familiar tunes, Hanggai have made the leap from folk phenomenon to crossover pioneers — without losing their soul. This is a not-to-miss show. Music this powerfully intimate does not come around often.

Rising to fame as the leader of one of China’s most acclaimed alt-rock bands, Wood Pushing Melon, Song Yuzhe embarked on a solo career after WPM disbanded in 2002.

Since then, Song has staked out a place at the forefront of China’s experimental music scene as both a musician and a recording engineer, reworking traditional folk ballads with new arrangements, and mixing his original music with ambient sounds recorded in Tibet and other minority regions in China.

He has also collaborated with avant-garde folk hero Xiao He to compose Two Big Men, a work that blends folk music and theater.