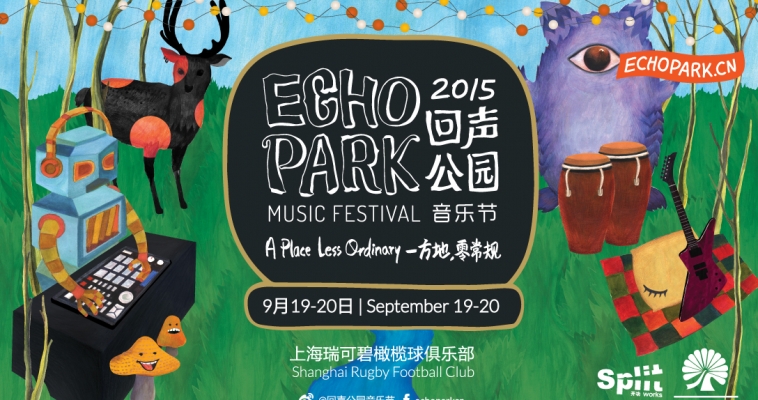 On September 19 and 20, Echo Park hits the Shanghai Rugby Football Club, an amazing outdoor venue with vast fields of real grass. Today, Split Works and Damai Live come together to create a new music festival brand, holding a “press conference less ordinary” that brings together hundreds of music fans online. Echo Park invites both cutting edge and well-known indie artists from China and around the world to take part in an experience unlike anything China has seen before. We are creating a special place for those who love music and life, to play and escape for a weekend full of surprises and wonder.

Now, the moment we’ve all been waiting for: the Echo Park first round lineup reveal! This is just the first glimpse into the diverse, exciting acts we have in store for fans at Echo Park. They represent a cross-section of some of the best from the Chinese music scene, and international gems who bring with them something truly refreshing.

For this first lineup announcement, we’re proud to announce Young Fathers, the red-hot British contemporary hip-hop group, whose critically acclaimed debut album Dead won the Mercury Prize in 2014; the seminal Japanese hardcore band Envy; who are redefining the genre as we know it; and My Chemical Romance frontman Gerard Way, who will be bringing his alluring solo work to Echo Park.

We are equally proud to present an important part of the first lineup reveal – carefully selected and outstanding bands from Hong Kong and Mainland China. We have Hong Kong indie darlings Chochukmo, electro-rock veterans Duck Fight Goose and one of the most talked about mainland bands at the moment, The Big Wave. It’s a rare sight to see these amazing artists share festival stages with their international contemporaries.

Super Early Bird Tickets are sold out, while “Pre-sale” tickets can now be reserved online!

The early bird got the worm–Echo Park’s Super Early Bird Tickets were so hot they sold out within 6 hours. Thanks to everyone who supported and trusted us, without even knowing the lineup! Now, Echo Park’s Pre-sale tickets can be reserved online. They’ll be 200 RMB/day (260 RMB door) or 300 RMB (400 RMB door)/weekend. To find out more information, you can check out our official Echo Park Website: http://echopark.cn. There are a limited number of tickets, so get yours soon!